Has The APEC Really Made A Difference?

As this year’s Asia Pacific Economic Cooperation (APEC) summit draws to a close, the leaders of the 21 member economies once again pledged for solutions to strengthen economies amid the financial volatility that continue to plague the world’s markets.

Unlike the WTO (World Trade Organization) where each member is governed by a set of rules, the APEC thrives on commitments signed into a declaration every year to forward its mission: to facilitate economic growth, promote cooperation among states, liberalize trade, and create opportunities for investments in the Asia-Pacific community.

The annual summit, specifically the leaders’ meeting, has served as a venue to conduct bilateral or multilateral agreements, trade or otherwise, among other APEC leaders.

Among the first pledges forged by the leaders in 1994 in Bogor, Indonesia was to achieve a free and open exchange of goods, services and investments across Asia-Pacific.

Has the APEC really made a difference?

Yes it has. And much of the progress we’ve been experiencing throughout the region has in one way or another an effect of the annual summit. Opening trade means increasing the range or products now available in markets. An increase in trade will mean an active economic activity and in turn create jobs, which also fuel domestic consumption and in turn drive further economic growth.

After 26 years since the birth of the APEC, let’s take a look at how far each member nation has gone in eradicating barriers to boost trade within the region. 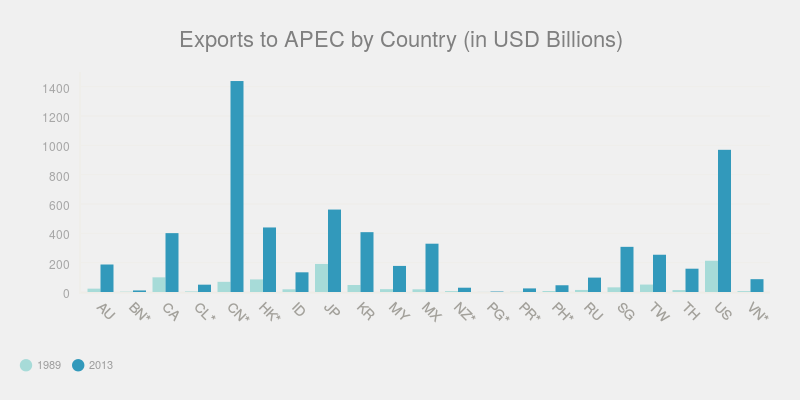 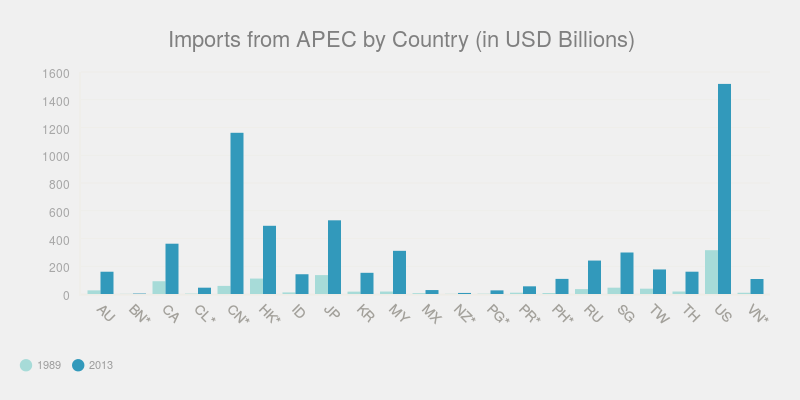 As seen in both graphs, all economies benefited immensely from participating in the APEC. Trade among the APEC nations has quintupled for both imports and exports since it was established in 1989. Merchandise crossing between borders has risen to $6 trillion, according to APEC statistics, and accounts for a third of the world’s total.

Among the 140 signed free trade agreements a third of which has been made with a fellow APEC member, or roughly a ratio of 2.4 per APEC nation compared to the 0.45 to the rest of the world. This more or less has resulted to an even greater exchange of goods and services and has lowered trade barriers, decreasing by as much as 11% to settle at an average of 5.8% in 2010 from the original regional average of 16.9% in 1989.

While the economic transformation will not be easy, the leaders each committed to “continue to drive regional and global economic prosperity through quality economic growth.”

In light of the recent terrorist attacks in France, Lebanon, and against a Russian aircraft, the APEC heads has also “stress[ed] the urgent need for increased international cooperation and solidarity in the fight against terrorism,” which also poses a threat to global economic stability.

Peru will chair APEC throughout 2016 and host the 24th APEC Economic Leaders’ Meeting.

Looking for extra cash? Compare rates, and find the best one!