Nowadays, smartphones are no longer items of luxury, but rather a necessity to get our day-to-day duties done.  While the necessity of having the latest smartphone can be a good subject of debate, we can all agree that even the most affordable smartphones today can already get the job done.

In this article, we list down four of the best budget smartphones below ₱10,000. This isn’t necessarily a tech guide on what phone you should buy but rather why the smartphones in the list are worth the money and highlight some reasons why you should buy it.

Real Me may be the new player in the smartphone market but they have proven time and again that they’re good at making affordable but powerful smartphones. One of their latest offerings in the budget phone category is the Real Me 6. First of all, if you’re a fan of big-screen phones, this smartphone will not disappoint. It sports a crisp 90Hz 1080 x 2400 pixels display – to put this simpler, not only will pictures look clear on the screen, but phone animations (when you swipe between screens) will also look smoother too.

On the other hand, its camera system is more than good enough for its price tag. You get four cameras at the back – a macro camera, a depth camera (a sensor to improve those bokeh shots), a regular (wide) camera, and an ultra-wide camera. On the front, it got a punch hole on the screen where the front camera is sitting. Its cameras take decent photos and are definitely good enough to share on social media

The base price will give you 4GB RAM and 64GB storage, but it’s also expandable up to 512GB via microSD. You’ll have more than enough storage for your photos, videos, games, movies, and everything else. This phone will also last you all day with its 4,3000 mAh battery and it even comes with a fast charger.

If you’re looking for an affordable day-to-day driver for basic tasks like social media, phone calls, zoom meetings, basic photography, and some light gaming, this phone should be a good candidate.

One of Huawei’s most affordable mid-range phone offerings. It pretty much does everything that you’d expect from an expensive smartphone, but with some limitations. First of all, the key highlight of this smartphone is its quadruple-camera set-up which is equipped with an AI sensor called SuperSpectrum Sensor. True enough, it can process average shots into nice-looking photos perfect for Instagram, it can also take night shots better than other phones within its price range. Its camera system can let you shoot macro and ultrawide shots because each mode has a dedicated camera and it comes with a depth sensor to take good portrait shots.

This phone’s display is also big and wide, with enough screen real estate to watch videos and play games comfortably. On paper, its 6.67-inch screen is spec-ed at 2040 x 1080 resolution, more than enough pixels to give you a crisp visual experience on a smartphone, realistically speaking

This phone is also running Android 10 and is expected to get OS updates for at least a few years for longevity. You also won’t worry about storage because aside from its 128GB internal memory, you can expand it with up to 512GB microSD card. Multitasking will also be decent with this phone due to its 4GB RAM.

The Huawei Y7a also prides itself as a smartphone that will last you a day with a single charge due to its 5,000 mAh battery and its built-in power-saving AI. They throw in a fast charger that could fuel up the phone with two hours of battery life in just two minutes of charging.

One of Vivo’s latest mid-range smartphone offerings is designed for gaming. It features a Helios G80 octa-core processor that promises a smooth gaming performance. On top of that, it’s one of the very few smartphones in its price range that comes equipped with 6GB RAM. Overall, it promises a solid – but not overwhelming – experience for your mobile gaming. The downside to this phone is that it uses a micro USB 2.0 charging port, not USB type-C which should be the standard today. However, this shouldn’t really affect the usability and functionality of the phone – although it might limit how fast the phone can charge.

Another key highlight of this phone is its camera, it has a triple camera module at the back, two of which are for portrait shots (macro camera) and ultra-wide shots (ultra-wide camera). There aren’t any gimmicks to its camera system, it just works as it intends to. Basically, its camera should be more than enough to help you get the job done for those Instagram, Facebook, and Tiktok posts.

One of the best budget phone offerings from Samsung. While it doesn’t exactly flaunt the best design for a smartphone, it does deliver more features than you could ask for from its price tag. 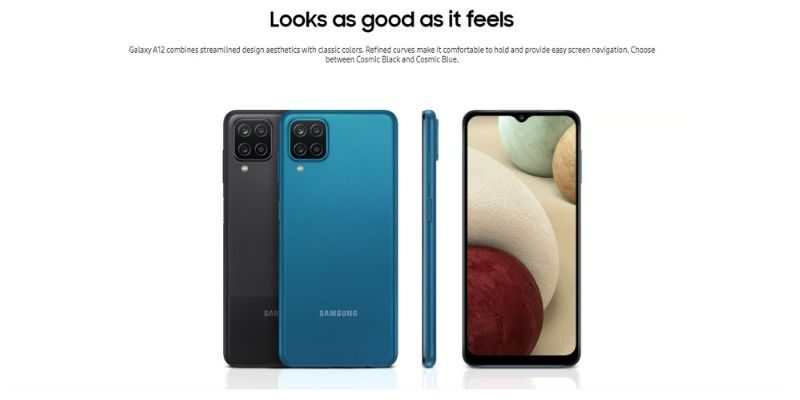 First of all, it comes equipped with a quadruple-camera at the back, showing off an ultrawide camera, a macro camera, a depth sensor, and the main camera. If you’re particular about the different camera modes that are common in smartphones nowadays, you will not be disappointed with this phone.

On the front, you’ll be greeted by a 6.5-inch display equipped with a 720 x 1600 pixel screen. It’s not the sharpest, but it’s enough pixels for a smartphone to make the images on the screen look acceptable at this price point.

Phones this big normally would last you all day, and this one is no exception. With its 5000 mAh battery, you can take this with you from sunup till sundown with just a single charge. Other internal specs you might care about are that its base storage is 128GB and RAM is 6GB, its storage is expandable up to 512GB. On top of the MicroSD slot for extra storage, you also have an extra slot for an extra sim card. If dual sim is your thing, this phone should be it!

What should you not expect from these phones?

Realistically speaking, entry-level smartphone processors only offer the most basic hardware. You’re not going to be doing much gaming on them, and the displays are not going to be all that sharp or bright. What you’re getting here is a phone that helps you go about your daily life without all the bells and whistles.

If you’re on a budget and don’t need a phone for anything more than just checking email and social media, then these are the phones for you. Otherwise, you may want to look into spending a bit more on your daily driver.