The worldwide rankings for universities was released by the education firm Quacquarelli Symonds (QS) this June. Out of the 300 top universities in Asia, four Philippine universities made the cut:

70. University of the Philippines

The state university slipped seven places in the rankings, while Ateneo de Manila went up one spot compared to its 2014 rank. UST and DLSU suffered slides, with UST falling two places and DLSU 30.

So what is the cost of college at the top four universities in the Philippines compared to the top four in the world?

The Cost Of Attending The Top Schools In The Philippines 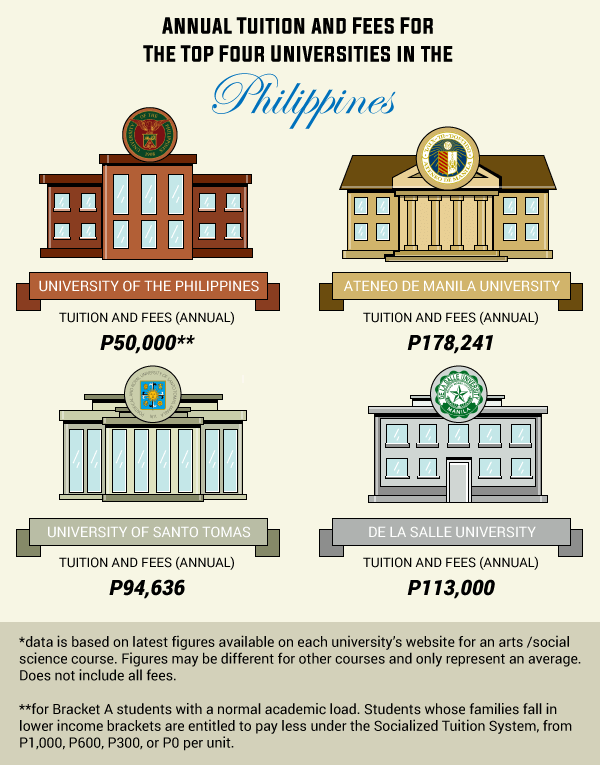 As you can see, the top university in the country can also be the cheapest, especially if your family earns less than P1 million a year. Those in lower income brackets pay less per unit, ensuring that a top-class education is not out of the reach of even the financially needy.

The private institutions listed above can be pricier than a state education when you figure in all the fees involved.

The Cost Of Attending The Top Schools In The World 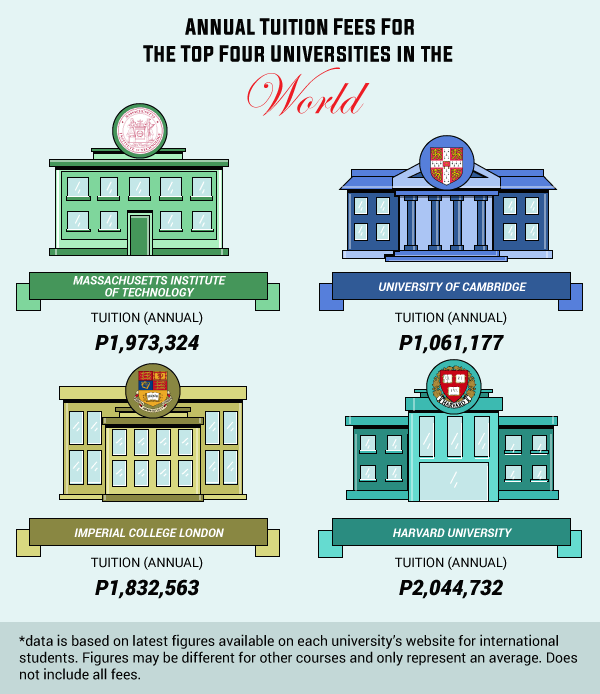 At first glance, an education at these prestigious institutions might give you and your wallet heart attacks. And that’s not even including the following fees and expenses: 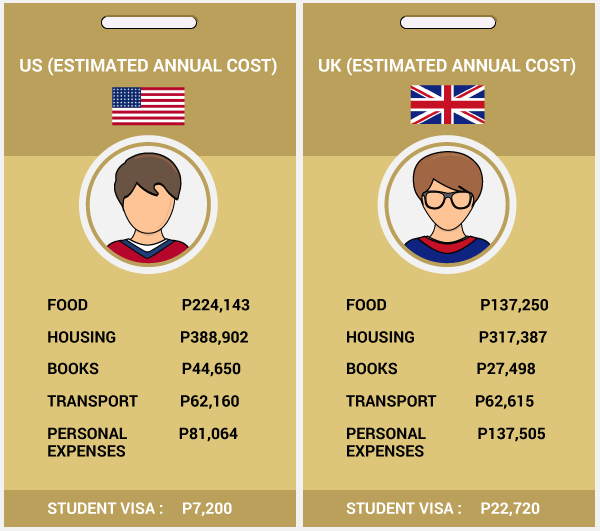 (fees are estimated based on data provided by the above universities)

Of course, these expenses can vary depending on your child’s lifestyle and the location of the college. If your child will be living in an on-campus dorm, he may not even have to worry about transportation costs since he can bike/walk anywhere, only paying for transport when he leaves campus for London or Boston or elsewhere. You can also lower costs by signing up for different meal plans, or having your child cook some of his own meals instead. But even with those concessions, it looks like studying in the US or the UK is beyond the reach of many.

However, if you are set on providing your child with an education at some of the most exclusive (and expensive) institutions in the world, do not let these “sticker prices” deter you. The rule is, the more expensive a university is, the more money they have to help financially needy students — especially in the US.

Your Child Could Go To Harvard For (Almost) Free

At MIT, students whose families earn less than P3.4 million a year can attend practically for free through a combination of scholarships. For Harvard, families making less than P3 million a year do not have to pay anything for their child’s undergraduate education, with almost all expenses covered. International students also have the chance to supplement their finances by taking on-campus jobs, to a maximum of 20 hours a week.

So even though the total cost of one year at Harvard or MIT is almost P3 million, you could pay almost nothing at all. MIT and Harvard are two of only six US universities that are “need-blind” towards international students — meaning that your financial situation is not considered when they are deciding to admit your child or not, and they pledge to meet all your financial needs through a combination of scholarships, subsidies, and student employment.

The other top two universities in the world offer some financial relief as well, though it can be much more competitive. At the University of Cambridge, “overseas students” (non-UK or EU students) who are embarking on a research program and have high academic achievements can win one of 80 scholarships that pays for all tuition and fees for the duration of the course (three years). Imperial College London lists a number of external funding opportunities along with their admission material.

Of course, the hard part, even harder than paying for college, is getting in. In 2014, MIT accepted only 7.9% of applicants, and Harvard accepted even less — 5.9%. The University of Cambridge accepted 20.8% of applicants in 2013, and Imperial College London accepted 15.2%. In comparison, Ateneo de Manila accepts 10 – 15% and UP around 18% of total applicants.

Making The Right College Decision — It’s Not Just About Cost

When making the decision about which colleges your child should apply to, make sure you know the true cost of attendance, and all the scholarships available. With financial aid and student employment, four years at Harvard may be well within your budget! And if you figure your child’s improved future earnings due to their good education, your return on investment may be much greater.

So don’t let sticker price be the only factor in your child’s education. You and your child have to decide together if it’s worth it to go abroad for a college education, or if staying in the country is a better option. And once you’ve chosen a destination, make sure to research all the costs involved so you can financially plan for your child’s education.

Can you afford to send your child to the best schools in the country? The world? Sound off in the comments below.