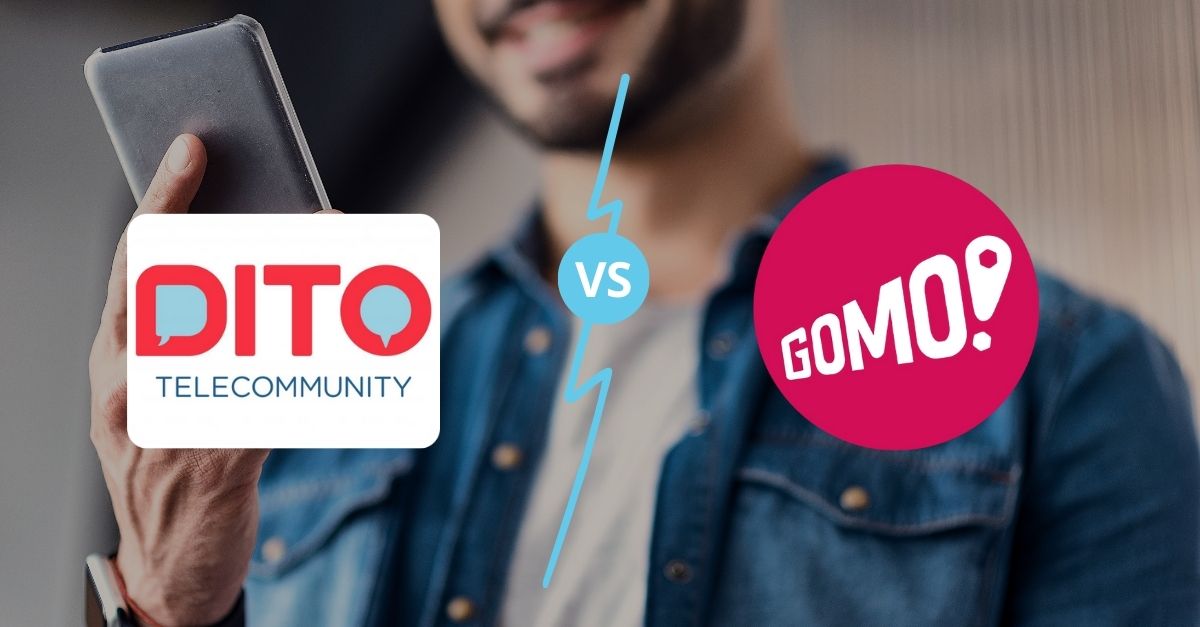 DITO vs GOMO: Which Offers A Better Mobile Data Plan?

It seems like the battle of the telcos has already started in the Philippines. Other than faster broadband offers from our local ISPs, mobile data offerings have also been extremely interesting in recent months with a slew of affordable prepaid data plans with sizable data allocations on the rise.

There are currently two providers at the forefront of this new breed of prepaid internet providers – GOMO and DITO. Both promise an outstanding mobile internet experience, but which one works best for you?

We do a quick comparison of both to help you decide.

GOMO is the country’s first fully digital telco owned and operated by Singapore’s Singtel and is locally powered by Globe. It functions like every mobile network provider in the country minus its own frequency (because it is riding on Globe’s network). The company currently operates in four markets: Singapore, Ireland, Thailand, and just recently the Philippines.

Since GOMO doesn’t have its own infrastructure, it taps on Globe’s network of towers to operate and provide coverage to its users. GOMO hasn’t released a list of areas it fully covers but it’s safe to say that their service is accessible as far as Globe has coverage.

However, has GOMO released a list of areas where 5G is accessible with their sim, and sadly it’s only limited to a few cities in Metro Manila at the moment: Makati, BGC, and Ortigas.

30 GB data only
25GB data with call and text

First of all, you can take full control of your data because it doesn’t expire. It doesn’t matter if you’re an occasional data user because you prefer to use wifi at home or you’re constantly consuming media while you’re out and about, you can plan your data usage efficiently around data offers that don’t expire. However, this will be most beneficial for those who want to have a secondary internet connection especially for work-from-home users who need backup internet in case of blackouts or occasional intermittent connectivity.

The drawback to this is that it’s reliant on Globe’s server, thus it may or may not work efficiently in your area. If Globe has strong coverage in your location, this should provide a fast connection, otherwise, you might want to test it out first before even considering it as a backup internet connection.

How to order a GOMO sim?

GOMO is purely a digital telco provider and purchasing their sim is only done online. You can either buy it from their website or through shopping platforms like Lazada or Shoppee. Shipping is free though if you purchase directly from GOMO’s website.

₱299 but it comes with a free 30GB unexpiring high-speed data connection.

Probably by now, we’ve all heard about Dito Telecommunity, the third major telco provider in the country. They haven’t fully established their home broadband offerings just yet, however, they’re kicking off their launch with prepaid mobile internet plans that promise fast internet speeds and a hefty data cap allowance.

Get it now for only ₱199
Apply Now

Since DITO is a newcomer, it’s a given that their coverage isn’t as vast as the more established telcos yet. However, it has already expanded across the country’s major cities and its neighboring towns with more than 2,000 towers set up to date. While it’s just a fraction of the 10,000 towers by PLDT and Globe, DITO is still continuously setting up more towers to cover all areas in the Philippines.

To check if your area is already covered by DITO, you can visit their page for more updates: https://dito.ph/network-coverage.html

Why should you consider DITO Telecom?

DITO is off to a promising start as it was the first to offer affordable prepaid data plans that provide a good amount of data. It’s basically setting the trend for this type of data plan. Their base offering is also more affordable than GOMO, thus it’s more accessible to more people with tighter budgets.

There are a few major drawbacks that may keep you from going for DITO:

How to order a DITO SIM?

DITO has set up concept shops in major malls across the country, you can easily walk in and buy from those shops. The more convenient option to purchase their SIM however is through Lazada and Shopee, but you’ll have to wait for a few days to get your SIM. Alternatively, you can also get it through our website, just click the link below.

Get it now for only ₱199
Apply Now

GOMO may have a more established network due to its partnership with Globe, but it’s also a known fact that Globe’s coverage isn’t as good in areas like Mindanao where PLDT’s smart is more dominant. A 2020 study done by Open Signal could give credence to this showing a consensus where Smart is seen to perform better in Mindanao with faster download speeds compared to Globe. And with DITO initially establishing a foothold in the region, its coverage may even be better in Mindanao.

If you live in key cities like Metro Manila, Cebu, or Davao, perhaps choosing between the two will boil down to your preference. If you’re in it for more perks, GOMO should somehow satisfy that need with their ‘Mo Creds, which you can convert to extra data allocation and SMS. On the other hand, if you’re looking for a more affordable option, DITO with its PH99 data plan offer should be a practical choice.

Either way, both of these providers are only offering mobile internet – for those moments when you need internet in a pinch. At most, these prepaid internet plans should only be used as a secondary internet connection for data needs when commuting, away from home, or while traveling within the country. It can’t replace a good old fixed broadband connection, but it is the next best thing especially when you have no access to home wifi.