TRAIN Law 2, Will You Be Affected?

Tax changes are coming but how does it affect you?

As a regular taxpayer, perhaps the thought that comes to mind is whether this controversial tax reform has any bearing on your annual income.

The Tax Reform For Acceleration Law (TRAIN) is the Duterte’s Administration brainchild to reform taxation in the Philippines. The first part is now a law, bringing down personal income taxes drastically. As a compromise, the cutbacks have been spread towards taxing some of the day-to-day commodities, contributing to the country’s inflation.

While it did provide the working population in the Philippines with higher disposable income, critics of the tax reform say that the burden of compensating for those lost taxes are now on every consumer’s shoulders.

This is just the first part of three phases. Next on the government’s tax reform pipeline is the TRABAHO, short for Tax Reform for Attracting Better and Higher Quality Opportunities. The package 2 of the tax reform law aims to address this disparity. While it is designed to bring down corporate taxes, there’s more to it than just tax cuts.

The Tax Reform for Attracting Better and Higher Quality Opportunities (Trabaho) is focused on two things:

According to the Department of Finance (DOF), this second package of the TRAIN law isn’t just aimed at cutting down corporate taxes, but it is also designed to achieve the following:

The Philippines has the highest CIT in the ASEAN, even higher than those in developed East Asian neighbors. This represents a disincentive to businesses unless they get various tax exemptions or reduction and thus, the plan to cut CIT.

Other than the country’s corporate taxes being the highest in the region, the current incentive system is also very complex and isn’t efficiently implemented. According to  data, there is a huge inequity under the current system:

This inequity may be represented by the number of SME’s paying the regular 30% corporate tax rates, meanwhile, in the current corporate tax system, bigger businesses easily thrive due to tax incentives.

Additionally, despite giving the most generous incentives to more than 650 firms, Foreign Direct Investment still pales in comparison to neighboring regions as shown in these charts provided by the DOF. 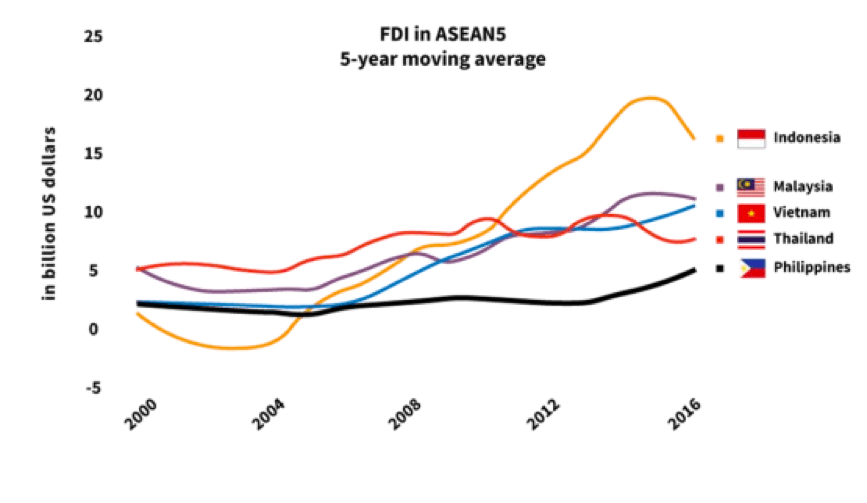 Also, export competitiveness has been declining According to the report by DOF, the country’s Revenue Productivity (tax compliance of these businesses) is very low with only 12% in 2015. This is far behind Singapore’s 21%, Vietnam’s 29%, and Thailand’s 31%.

While there was a significant improvement in recent years, with this tax compliance increasing three times in 2016 compared to 2010, it is still low compared to what the emerging and developed neighbors are getting.

In a nutshell, CITs will be the same across the board and will eliminate the Income Tax Holidays (ITH) and special tax rates granted to businesses belonging to the following sectors:

How will this affect business owners?

While it does not have a direct effect to the consumer’s wallet, entrepreneurs and investors, on the other hand, will feel the brunt of it. Its aim is to streamline corporate taxes, taxing businesses and corporations equally. According to DOF, corporate tax rates became unequal due to the current tax incentive system. It gave tax relief to some big corporations (who aren’t necessarily causing a big impact to the economy) while many SMEs aren’t benefiting from these incentives.

Tax incentives will not be given out easily and little is known whether there will be a different tax incentive scheme.

Ultimately, businesses will be paying the same taxes across the board but not necessarily lower. Businesses who are registered under different sectors for tax incentives may have to pay higher taxes, meanwhile, local businesses not listed in sectors that are subject to tax incentives will mostly be enjoying lower taxes.

The good news is, businesses who are currently enjoying their tax holiday and incentives will be able to retain their current incentives for two years. This will grant them enough time to adjust to the new tax scheme.

Who exactly will be affected?

Other than businesses in general, those that are registered under the following sectors will feel the brunt of it. Whether or not it’s a good impact on their business, depends on their current compliance.

How will it affect you?

At this point, it isn’t exactly accurate to say that this will cause inflation. Depending on how efficient the government will be implementing its mitigating measures, it’s still too early to tell. Despite bringing down the corporate taxes, it will not be lower for some.

Meanwhile, in the aspect of employment, this might help the country create more jobs. That is if the said bill will be able to follow through its measures efficiently.

Supporters of the bill said the new name better reflects its objectives this tax reform package. Its goal is to create jobs by attracting the right set of investments through incentives, according to one of its proponent during a panel hearing.  While TRABAHO will cut tax incentives, it will, however, grant them to businesses that will bring more jobs and provide a better contribution to the economy in the long run