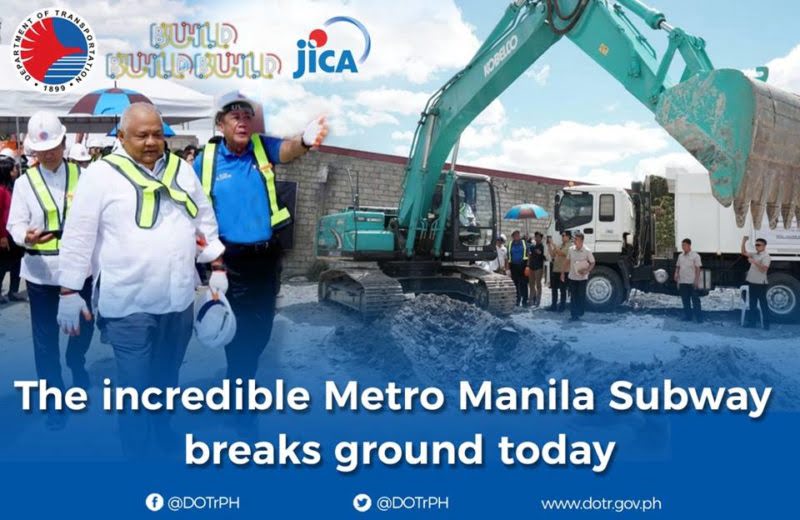 The Department of Transportation on Wednesday has broke ground on the Metro Manila Subway Project in  Barangay Ugong, Valenzuela City. This will be the country’s first underground railway system and one of President Duterte’s flagship project under the “BUILD BUILD BUILD”.  This mass transit project is expected to transform the economic and social landscape of the National Capital Region.

The Metro Manila Subway will be built with the support of the Government of Japan through an Official Development Assistance (ODA) loan from the Japan International Cooperation Agency (JICA). This subway will be a 36-kilometer stretch from Valenzuela to the Ninoy Aquino International Airport. It will have 15 stations from Quirino Highway in Quezon City to NAIA Terminal 3 in Pasay and FTI in Taguig, crossing 7 local governments, and passing through 3 of Metro Manila’s business districts. It will cut down the travel time to and from both ends to just 30 minutes. It will connect to the MRT-3, the LRT-2, and the Philippine National Railway lines.

Considering Metro Manila’s exposure to weather and seismic events, a condition very similar to that of Japan, the Metro Manila Subway employs Japanese technologies to make the system resilient against natural disasters.  In fact, last week, Secretary Tugade himself inspected Tunnel Boring Machines (TBM), subway flood control equipment, and other technological advancements and practices in railway operations during his visit to Japan.

On February 20, 2019, the DOTr signed the main contract for the design and build of the Metro Manila Subway’s depot and first three stations, or its partial operability section, along with the structures and facilities of the Philippine Railway Institute. The first three stations consist of the Quirino Highway-Mindanao Avenue Station, Tandang Sora Station, and North Avenue Station.

The government aims to finish the first 3 stations (Valenzuela, Tandang Sora, and North Avenue) before the end of Duterte’s term in 2022.  Meanwhile, full operation of the 15 stations is expected to in 2025. In its first year of full operations, the MMSP is expected to serve up to 370,000 passengers daily, but has a design capacity to accommodate up to 1.5 million passengers per day.