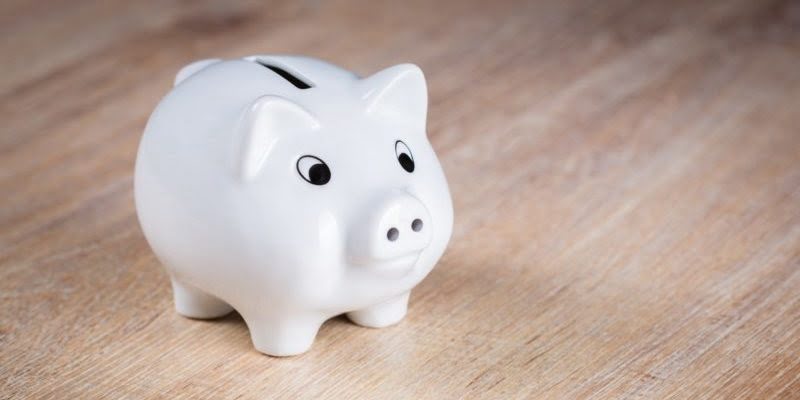 Money Saving Trends To Start Your Financial Goals In 2022

Saving money is difficult for most people. It isn’t as simple as putting money in your separate savings account or piggy bank because us mortals need a more enticing motivation than just saving money for the rainy days. Also, because it’s just fun and gratifying to spend, especially if it’s for our own pleasure. However, in recent years, more Filipino are starting to commit to such a feat.

According to a Financial Inclusion Survey done by the Bangko Sentral ng Pilipinas (BSP) in 2017, 48 percent of the total adult population had some form of savings compared to 43 percent in 2015. The survey also reveals that 32.7 percent of Filipinos are saving their money at home. This tells us that Filipinos still prefer saving money the traditional way (and probably with a piggy bank, too).

It’s no wonder why in recent years, various money-saving challenges have trended in the Philippine social media landscape. With their compelling call to action and other gimmicks, many Filipinos actually fancied these fun goal-oriented games and hopped on the money-saving challenge bandwagon.

If you missed these creative and fun money-saving schemes that trended in the past, we have collated them below and provided an overview of how they work! 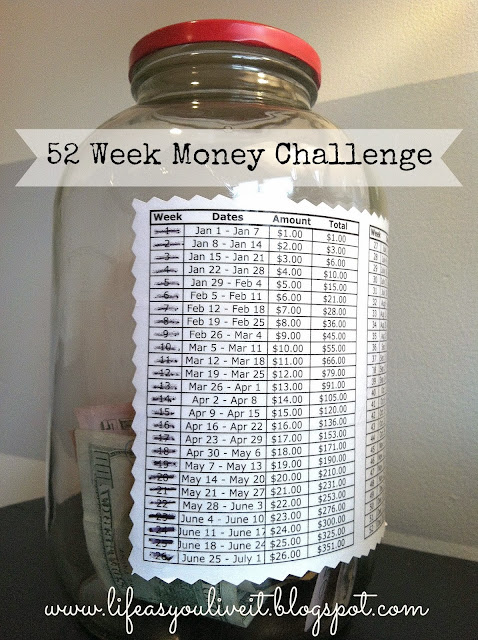 This money challenge was originally an idea introduced by “Life As You Live It” blog, and was later on repurposed into a Filipino savings challenge by Kuripot Pinay, a Filipino blogger.

In a nutshell, this money challenge is all about saving weekly, but with increments. For as little as 1 peso initial increment, you can actually amass ₱1,378 in one year. Since that isn’t really big enough of a saving, ₱50 weekly increment is the standard in the proposed money challenge, which will balloon into a ₱68,900 savings by the end of the year. However, the increment doesn’t really have to be ₱50 a week, it can be any amount depending on how much money you want to achieve by the end of the year.

Originally, the proponents of this money-saving fad had the following to facilitate them in completing this year-long financial task:

While it’s best to start this challenge at the start of the year to complete it in time for Christmas, you can do this any time of the year as long as you’re financially ready to commit to this feat.

Here’s how much you can save at the end of the 52nd week of this money challenge based on the corresponding increments:

Big reward when accomplished and it can help you develop some good financial habits, too, because it takes a lot of financial prudence to get by this challenge’s last leg.

This money challenge may call for a lot of determination, discipline, and major peso-pinching, especially towards the last few months of this year-long financial journey, which can be burdening not just mentally but also financially. The weekly amounts will gradually increase along the way and will hit a threshold that may be unrealistic for many Filipinos who are earning just the average salary for the working population.

The amounts can be arduous, to say the least, and may affect your cash flow in the long run. It may require some major lifestyle changes if you’ve committed yourself to a large increment template. 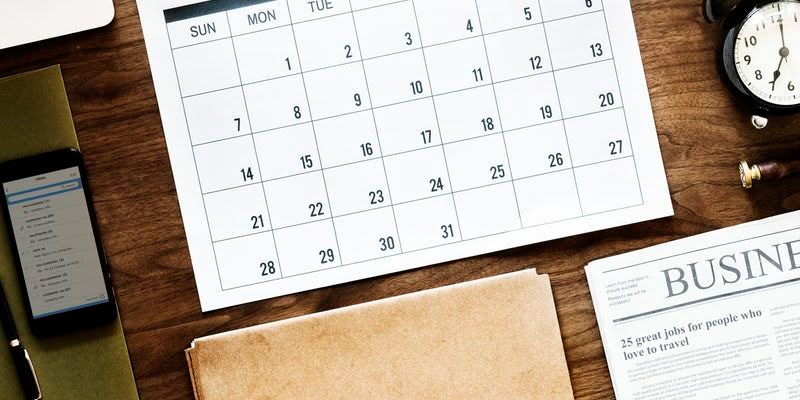 This money challenge was created as an antithesis to the 52-Week Money Challenge. While the goal is still to save a good sum of money towards the end of the year, the method is entirely different. It addresses the flaws of the 52-Week Money Challenge where it gets entirely expensive towards the end. While it wasn’t exactly unattainable, it can be unreal and impractical to many people.

This money challenge was created by Alvin T. Tabañag and was published in Rappler. Unlike the money challenge before it, the 12-Month Challenge put into the equation the income of a person to make it more sustainable and achievable.

The goal is to save money for twelve months by increasing the savings amount per month in percentage, together with a pledged monthly amount (base amount) that you can easily afford. The base amount is constant for the entire run, but you can also increase or decrease based on your financial situation.  The percentage monthly increase, however, will be derived from your income and it’s fixed at 1% at the beginning and 12% on its last month, this will ensure that your savings ratio will not go beyond your disposable income and will not compromise your cashflow entirely.

And unlike the 52-Week Challenge, you can choose to have a base amount at the start of the challenge, but you can also choose not to.

Here are some examples and templates which you can take inspiration from for your 12-Months Savings Challenge.

This is a more practical approach to developing a monthly saving habit. It’s also more affordable to most working-class Filipinos and promotes a habitual process of saving.

The only downside for this method is that the amount isn’t as promising as the 52-Week Challenge. However, you can always amp it up by increasing your monthly base amount when you have sufficient money to do so. 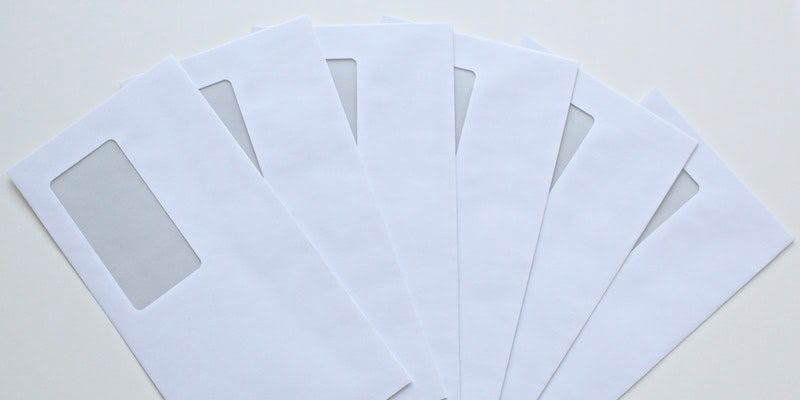 While this money saving scheme is less complex, it’s nothing short of creativity. However, unlike the first two money saving challenges, this one will give you more liberty on when you want to stash in your money and until how long.

The idea is very simple. Gather as many envelopes as you want and label them with different amounts (which your wallet could afford without compromising your monthly obligations). Simply fill each envelope with the corresponding amount on its label. Once they’re all filled, deposit the money to your bank account.

The only rule in this savings challenge is to fill the envelope with its corresponding amount, there really isn’t any particular timeframe set to complete the task or particular amount to reach. You can basically save on your own pace.

You can set any amount for each envelope and have as many envelopes as you want.

It’s more flexible than the other money-saving gimmicks, and less pressure on your monthly income.

The lack of timeframe to completely fill all your envelops may not give you enough drive to accomplish this savings challenge at all. But hey, that doesn’t mean this won’t work. As they say, different strokes for different folks. There are people out there who can work better with this scheme than the rest, although the majority of Filipinos may prefer a more structured approach. 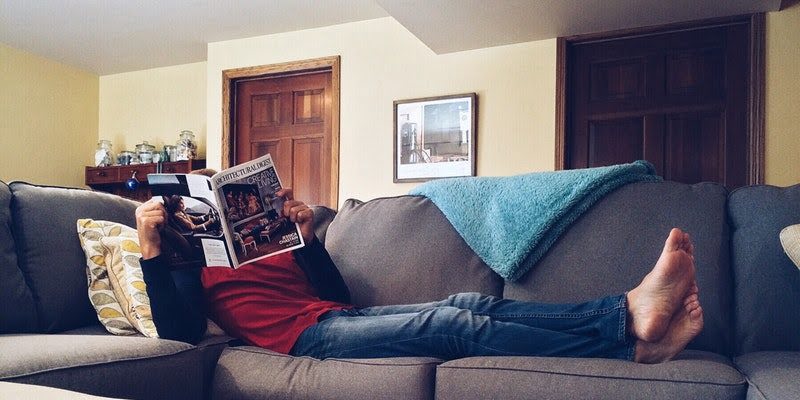 From the name itself, the challenge is all about cutting down on your expenses by not spending money on weekends (or during your off day from work).

According to Wallet Moth the creator of this money saving scheme:

Many people find themselves sticking perfectly to budget throughout the week, but when the weekend begins, all hell breaks loose. Meals out, trips to the shopping centre, movies

It’s a statement that everyone could easily agree on. Going out on a weekend to relax after a long week of hard work will cost a lot. That’s when our ego tells us to treat ourselves because we deserve a reward for working really hard. While that might be true, it can cause some major dents on our wallet.

This is a more practical approach to money saving. It won’t necessarily impose major lifestyle changes because it won’t affect your daily spending for the rest of the work week.

This is probably the most lenient money saving challenge on the list. It lacks a sense of urgency that will push people to actually put their money where their goal is. Also, it isn’t applicable for everyone since not everyone leads a lavish weekend lifestyle which they could easily leverage from with this challenge. 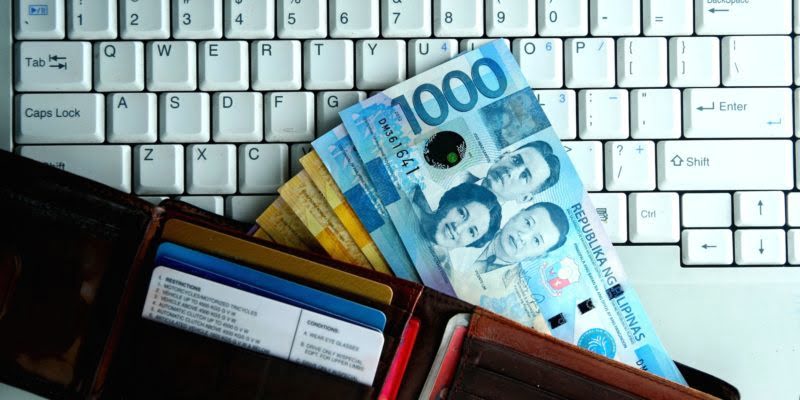 This money challenge was created by a financial awareness page on Facebook named, Peso Sense. The goal here is to save a hefty amount of money by the end of the year and the challenge is to complete the number of bills required in their sheet.

This challenge will give you the flexibility of where and how to stash your money and by how much and how frequent. That can work as a double-edged sword, as it may work to your advantage if you’re disciplined enough to stick to your savings goal. However, if you’re still on the edge of developing such a habit, the discipline aspect might be the actual challenge for you.

Peso sense ipon challenge is straight forward – by the end of the year, you should have marked off all the circles for each amount. Stash those bills somewhere you won’t have easy access to until the year-end.  This challenge is on the lenient side, so don’t be sidetracked and focus on achieving this goal!

Perhaps, you can do this money-saving challenge together with another one that imposes a definite amount for a certain deadline, like the 12-months or 52-week challenge. Or, you can draft a plan using the SMART goal setting method to flesh out your actual actionable goals to achieve this. 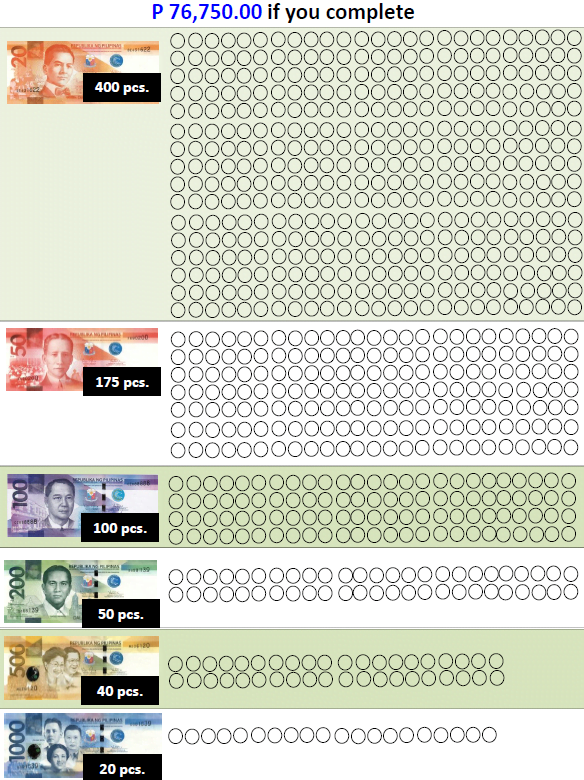 The advantage of this money saving challenge is that it can work hand-in-hand with another challenge. It doesn’t have a fixed interval as to when you should be stashing the bills in found in their sheet, so you can implement a different set of rules to make it more achievable or motivating for you.

The flexibility of this challenge is also its downside – it’s too lenient because it doesn’t have a defined set of rules that will help you build the habit of saving. That’s why it’s recommended to pair this up with another challenge like the no-spend weekend, so that you’ll have a clearer plan of action on how you could tick all those circles for each bills realistically.

This article was originally published in January 11, 2019 and is updated to keep information relevant and up to date.