The NBA is back, bringing with it another year of monster dunks, thrilling finishes, and epic games.

This season promises to be one of the best the league has ever seen—judging from what transpired last season that will be quite the feat. The Golden State Warriors added another superstar to their record-setting team. The Cleveland Cavaliers kept their championship team intact. The rest of the league, meanwhile, made their own moves to keep up with the two.

The most fascinating change this year though are the players’ salaries. With the influx of money from their new television deal, the NBA increased their salary cap (the total amount a team can pay their players) from $70 million to $94.14 million this season. This gave teams the ability to offer unprecedented amounts to players, and made the 2016 free agency season the richest in recent history.

Below is the new list of the highest-paid players in the league, along with how some of them chose to spend their money. 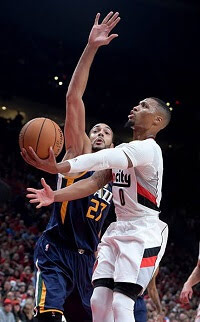 After earning just a total of $13 million in his first four years in the league, Lillard was given a whopping five-year, $139 million contract. It’s not that hard to understand why Portland went all in with their young playmaker—Lillard is a two-time All-Star, and finished last season as sixth and eight in scoring and assists in the league, respectively.

Lillard’s star power has also been recognized by brands: Adidas signed him to a $100 million contract to be the face of their basketball line, while American insurance giant State Farm added him to their roster of established NBA endorsers. The 26-year-old has also pursued his own music career as rap artist DAME D.O.L.L.A., releasing an album earlier this year that also featured artists like Lil Wayne and Jamie Foxx.

Unlike his fellow superstar members of the fabled 2003 NBA Draft Class Dwyane Wade and LeBron James, Anthony is still trying to get his hands on his first championship. What he lacks in hardware though he makes up for with eight-figure annual paychecks.

Carmelo is also among the few players who have also found financial success off the court. Among his recent successful business venture is TMNT x Melo, a collaborative project with Nickelodeon that sells apparel and accessories based on the Teenage Mutant Ninja Turtles. The three-time Olympic gold medal winner has also branched out to digital media with Melo7 Tech Partners, LLC. The firm invests primarily in “early stage digital media, consumer Internet and technology ventures.” 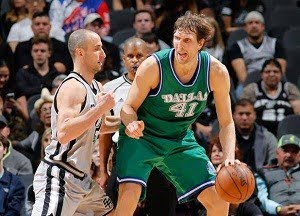 The Big German is now entering his 18th season in the NBA. You don’t last that long in the premier basketball league in the world if you’re not that good. Nowitzki is a former MVP, a champion, a 13-time All-Star, and is currently sixth in the NBA’s all-time career points list.

All those accolades have earned Dirk over $216 million in career salary. What’s more remarkable though is the estimated $80 million in paycuts he has agreed to over the past few years. “I want to play in a good team,” Nowitzki said of the “discount” he has given his team. The Mavericks used the extra money to surround their franchise’s star with players who could help him win another NBA title. 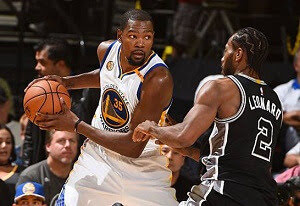 To some NBA fans, he’s the league’s new villain; the superstar who teamed up with his former conquerors from Golden State. But the prospect of winning his first championship probably wasn’t the only thing that swayed the 2014 MVP to move addresses. Durant also signed a massive two-year, $54.3 million contract.

KD is also in the third year of his $300 million, 10-year endorsement contract with Nike. He also has his own underwear line released through Neff and Foot Locker. So yeah, it’s not that bad being the villain. Westbrook has so far benefitted the most from Durant leaving the Oklahoma City Thunder. The point guard, now the sole superstar in the team, signed a three-year contract extension for $85.6 million. The five-time All-Star is also projected to lead the Thunder in almost every statistical category this season, making him an early favorite for the MVP award.

A menacing ball-handler who strikes fear in his opponents with his daring drives to the basket, Westbrook is also known to go all “beast mode” off the court. He’s a thriving fashion icon who has his own eyewear company—he popularized lenseless eyewear in the NBA—and designs clothes for Barneys New York and the Jordan Brand. Horford earned a total of $75 million in his first nine years in the NBA. He helped the Atlanta Hawks get to the NBA Playoffs every season, building a reputation as a dependable big man. He also earned four All-Star selections and a spot the All-NBA Third Team along the way. The Dominican Republic native cashed in on all his hard work during the 2016 free agency, signing a four-year $113 million deal to move to the Boston Celtics. The move gave the league’s winningest franchise the inside presence they’ve been sorely lacking while also recognizing Horford’s place among basketball’s elite. The Houston Rockets star ranked fifth in Forbes’ 2016 list of the NBA’s highest-paid players with $32.8 million, $15 million of which came from his salary. Harden’s ranking is expected to go up next year after as he’s expected to earn $26 million after signing a new deal.

The Beard is also one of the NBA’s most marketable players. His 13-year, $200 million endorsement deal with Adidas is one of the biggest the sports company has ever gotten into. Harden also recently joined forces with candy brand Trolli as their new brand ambassador. 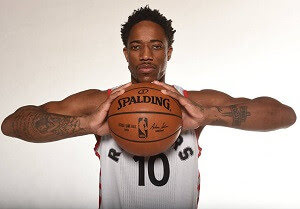 After reaching the Eastern Conference Finals for the first time in franchise history last season, the Toronto Raptors gave their starting shooting guard the third-largest contract in NBA history. DeRozan has led the Raptors to three consecutive post-season appearances while averaging more than 20 points every year and earning two All-Star selections.

After earning just $9.5 million per season the last four years, DeRozan celebrated his colossal raise by winning a gold medal at the Rio Olympics. Coming off the bench for Team USA, he mesmerized the basketball world with his dazzling array of dunks. He’s expected to do more than throwing down on people this season as he leads the Raptors to another successful run. Michael Jordan, Kobe Bryant, LeBron James, James Harden, and Mike Conley: these five share the distinction of being the only players to earn at least $30 million per season. Of the group, Conley has the least number of personal accomplishments, with no All-Star selections, awards, or championships to show.

The question now is, why did the Memphis Grizzlies gave him the richest contract ever in the history of the NBA? League pundits point to Conley’s ability to lead the team. With Conley at the helm, the Grizzlies have entered the Playoffs for the last six years. The team knows how valuable their point guard is to their franchise, and obviously believe that they’ll need him to continue their winning ways. This season marks the first time in his career that the best all-around player in basketball is also its highest-paid. Choosing to sign smaller contracts in lieu of playing in better teams or attracting talented teammates, the sacrifice rewarded James with four MVP awards and three championship rings. But after giving his hometown Cleveland Cavaliers its first NBA title, The King wanted his reward, which came in the form of roughly $100 million spread over three years.

But it’s not like LeBron hasn’t been raking in the dough. He made $44 million in endorsements last year, almost double of his NBA salary at the time. The 32-year-old superstar also has a lifetime deal with Nike, owns a piece of soccer team Liverpool FC, and has his own production company and website.

Sure, we can’t all make millions playing the sport we love. But that doesn’t mean we can’t make money off of what we’re good at. There are many ways you can make that happen. You can get a better job. You can pursue a career you really like. Or maybe even check out personal loan providers to enact your business ideas. The choice is yours.