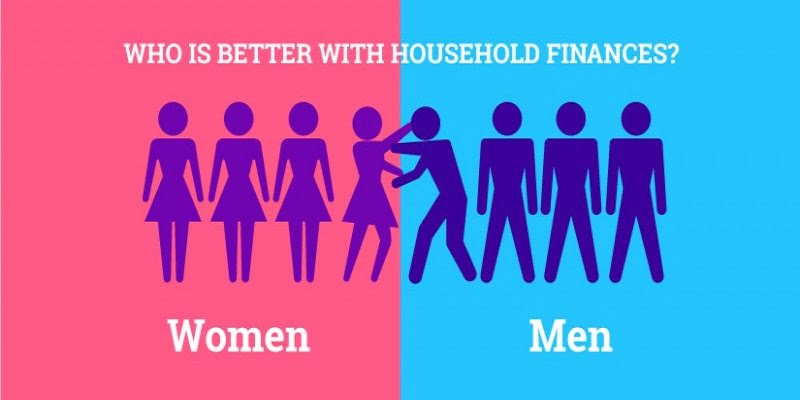 10 Reasons Why Moms Are Better At Managing The Family Finances

If you ask your wife or mother, who is better at managing finances, more than likely she will say she is. According to studies, she would not be wrong. Research has found that women are better at both investing and managing finances than their male counterparts. These studies have shown that women do a better job at keeping track of their spending, and are less likely to build unmanageable amounts of debt.

With Mother’s Day just around the corner, it makes sense to honor Filipino moms by examining the reasons why they are so good at managing money. Fellas, grab a notebook and a pen, and get ready to take notes. We are about to uncover 10 reasons why it may be advantageous to put mom in control of your family finances.

Debts are not always bad, but if not managed well it can lead to a financial catastrophe you can’t get out of.

A recent BMO study found that men are more likely to carry large amounts of debt than women are. In fact, 30% of men polled in this study reported having more than $100,000 (₱4.9M) of debt, compared to only 22% of women.

However, the same study found that men are also more optimistic about their ability to pay off debt quickly. Of the men polled in this study, 20% stated they would be able to pay off their entire debt in the next year, while only 14% of women felt the same way. Experts assert men’s overconfidence in their ability to repay could be a top reason for their excessive debt.

Numerous studies have revealed that women are better investors than most men are. Experts have attributed this to the fact that women tend to be more risk averse, and trade more conservatively than men. According to the BMO Women & Wealth Study, 30% of men described themselves as aggressive investors, compared to only 16% of women.

Though sometimes taking a little risk may pay off well in your investment, the general rule of thumb is to keep a balance between high risk and low risk investments in your portfolio. Being too aggressive often times can lead to bigger loss.

3. Men can be overconfident

Some researchers attribute poor investment performance to overconfidence. Brad Barber, a professor of finance at the University of California, found through a study that men are more prone to overconfidence than women are.

This is especially true in male-dominated industries such as finance. The study concludes that due to overconfidence, men are much more likely to expect their portfolios to outperform the market. In addition, Fidelity, a major investment firm, recently announced that female investors in the U.S. outperformed males in 2016 by 0.3%. In fact, Fidelity announced that women have outperformed men for the past 10 years.

A survey conducted by Lovemoney.com found that women keep better track of their spending than their male counterparts. Survey results indicated that men are more likely to ignore large amounts of debt, and even forget to pay bills, while women are more likely to chip away at debt with frequent payments. In the survey, 25% of men admitted to paying credit card bills late or forgetting to pay them all together, whereas only 17% of women admitted making the same error.

Being late on your bills can have dire results to your finances. Missing a credit card payment of just ₱10,000 could result in interest of ₱350. If you continuously miss your payments for 12 months, your credit card balance could snowball to ₱14,599.70!

5. Women are less competitive by nature

Research has proven that men are naturally more competitive than women. A competitive spirit is not always a bad thing; however, it can lead to major financial mistakes. Being too competitive from a financial perspective will not only cause issues with an investment portfolio, but it can also result in making poor financial decisions in an attempt to “keep up with the Joneses.”

President and CEO of BMO Investor Line, Viki Lazaris, states that females are more likely to seek out professional investment-related advice. According to a LIMRA Secure Retirement Institute survey, seven out of 10 women believe financial advisors provide value beyond what they could do independently. Only half of men surveyed agreed with that same statement.

The same survey also showed that women are more likely to trust the advice of a financial advisor. Experts attribute this to women’s preference for a more collaborative approach to finances. This openness to help often results in better performing investment portfolios, and overall better money management.

However, regardless of your gender, you should always do your due diligence when it comes to your finances and not just follow the advice of a financial advisor blindly.

7. Women have a lot of self-control

A study by Barclays Wealth and Ledbury Research showed that a competitive spirit in investments could actually be due to a lack of self-control. Behavior research has indicated that women are better at controlling themselves and their impulses, and are more likely to hold onto good investments and have more patience with underperforming investments than men are.

Studies have shown that women are more detail-oriented, organized, and meticulous than men. In addition, women are far more likely to exhibit perfectionist-like characteristics. Organization and high attention to detail are essential qualities to successful money management. Specifically, organizational skills are essential to budgeting and keeping up-to-date on debt.

9. Women are concerned with family financials

Research has shown that women worry more about family finances than men do. This is especially true if there are children in the home. Women tend to make conservative financial decisions, look more into the future, and exhibit more patience than men when there is a family at stake.

Women tend to have long-term financial goals that include saving for their children’s’ college tuition and investing for retirement, while many men focus on outsmarting the market.

10. Women are very concerned with retirement

The BMO Women & Wealth Study displayed the need for women to establish a strong financial plan that includes retirement savings. This study revealed than 69% of women have a retirement savings plan in place, while only 55% of men could say the same. This study also found than men are more confidence in their ability to save enough to fund their desired lifestyle during retirement, (79% of men versus 70% of women).

While strides have been made towards wage equality, women still make less than men, and typically live longer. This means women need to save more in order to feel confident in their ability to live comfortably during retirement.

Take a leaf out of your mom’s book!

Although the above-mentioned traits give women an edge over men in regards to managing finances, gender is not the only factor that indicates one’s ability to be financially successful. There are many elements that determine financial success, and there are many men who do very well with managing finances too. That being said, adopting some of the above traits, regardless of your gender, could help lead you down the path to financial success.

It’s important to set specific goals, be cautious when it comes to your investments, become less impulsive, avoid unnecessary risks, conduct extensive research when handling investment decisions, and do not be afraid of asking a professional financial advisor for help. Achieving financial success is not out of the realm of possibility. Chances are you have a great resource right in your home!

If you are interested on additional personal finance tips and money saving info, you can also check out these factors that Filipino women should know about money.