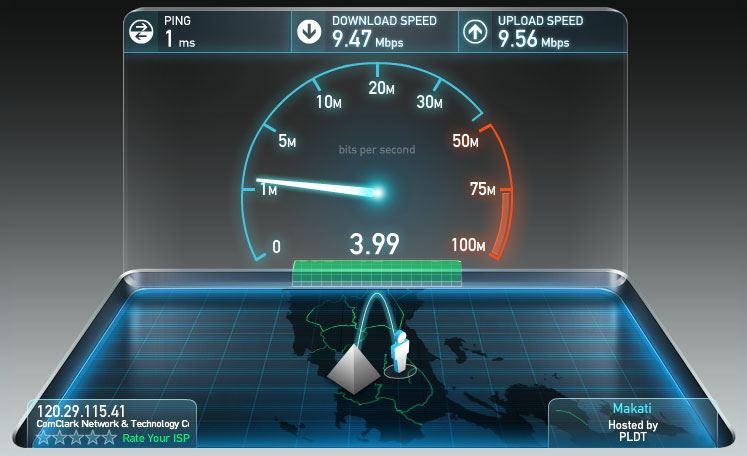 The Best Broadband Plan In The Philippines

According to a report from internetworldstats.com, the number of internet users in the Philippines increased by 13 million or 27% from January 2016 to January 2017, which is four times the 7% growth rate in the previous 12-month period. This translates to approximately 60 million Filipinos online, or roughly 60% of the population which is 10% higher than the global average.

That said, internet connection is now a necessity rather than a luxury and the need for a faster and more reliable internet service provider (ISP) is always at the back of everyone’s minds. Each ISP’s reliability, speed, customer service, and price vary per internet package, location, and the areas they service, and it is important to find out which plan fits your needs before signing on the dotted line.

If you’re more of a social media butterfly or someone who only uses the net for emailing and the occasional YouTube video streaming, then you can do with a connection speed of 1 Mbps. However, if you work from home or regularly conduct heavy browsing and downloading, then a reliable, faster internet connection, with a higher volume allowance is a must and you would do well to look at premium or Fiber plans.

To help you decide, we’ve put together a short list of the best broadband offers in the country.

At present, Converge ICT has 100,000 subscribers, while corporate users number 2,800. Converge already laid out more than 6,000 kilometers of its fiber-optic reach and that is still growing. To date, it offers consumers the following plans:

Get the fastest broadband connection today

Compared to the tenured ISPs in the Philippines, ICT purely offers fiber optics internet connection; they don’t have other services yet bundled with its primary service. No word whether they’ll be offering voice and cable services soon.

A one-time fee of ₱2,500 is required for the installation. This covers all the equipment needed for the set up in your home such as the cables, modem, and the router. On top of that, an advance deposit of ₱1,500. Overall, initially you’ll be paying ₱4,000 prior to the installment of their service.

Upon signing up for ICT’s broadband service, you will be locked-in for a 2-year contract. Should you decide to cancel their service before the contract period ends, you will be obliged to pay for the remaining months.

You signed up for the FIBERX 1500 which is ₱1,500 per month, and you decide to terminate the service after 12 months of use. You have 12 months left before the contract ends, leaving you with an ₱18,000 termination fee.

CT’s affordable but fast broadband service is a dream come true for heavy data users, not just gamers but also people who love to stream and download heavy files from the internet. In theory, for a household that has more than five devices streaming YouTube or Netflix, ICT’s cheapest plan will suffice.
On a peso-per-Mbps basis, Converge’s broadband plans is highly cost-efficient. Not only do they provide higher download speed, but they don’t impose monthly data cap.

But it is at a distinct disadvantage in terms of its coverage area since it’s mostly available in Metro Manila and some parts of Luzon with the farthest from Manila being Baguio up north and Batangas down south.

GLOBE is set to spend around $600 million this year on upgrading its mobile data infrastructure, focusing particularly around developing the 700 MHz and 2600 Mhz bands it acquired from San Miguel. In relation to this, they have announced that “they have begun commercial deployment of a new massive multi-input, multi-output (MIMO) wireless network technology to enhance the connectivity of users in high-density areas.”

Everything is still on the initial stages though, so not everyone has access to the high internet speeds that MIMO can provide. For now, ordinary customers can pick from the following options: 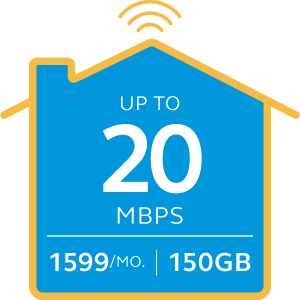 Other fees
There will be an installation fee of ₱1,000, this will cover all the equipment for the set up in your home. The installation fee can be paid in installment of up to three months, and will be added to your monthly bill.

For early termination, you will be paying for the remaining months left in your contract plus an admin fee of ₱550.

The good thing about Globe broadband is that it has a wide reach, as wide as PLDT’s. Their fiber optics connection is already available in many areas in the country and it has proven to be a tight competitor of PLDT for the same service.

The downside to their fast broadband services is that it’s all capped. With a data cap of 400GB, this service isn’t viable for a household with heavy users.

PLDT has invested ₱300 billion, or US$6 billion, over the last 10 years to roll out the country’s most extensive fixed and wireless network. This network includes a transmission and distribution network infrastructure, which now has 150,000 kilometers of fiber-optic cables, transporting the growing data traffic of its fixed line and mobile networks.

Though currently still limited to Toledo City in Cebu, General Santos in Mindanao, Naga City in the Bicol region, as well as south Metro Manila and the eastern section which covers the cities of Antipolo, Marikina, Pasig, Taguig, Caloocan, and the towns of Taytay, Cainta and Pateros; PLDT offers the following bundled plans for its broadband services:

All of PLDT’s broadband services are bundled with their basic landline service. Their landline provide unlimited local calls, but for other calling services, the rates are as follows:

Get the best broadband internet bundled with a landline

For two of the cheapest broadband plans (PLAN 999 and PLAN 1299), there will be a one-time modem and installation fee of ₱2,300. However, this can be paid in installments for as long as the duration of your contract, which is 24 months. For plans 1699 and higher, the installation and modem fee is automatically waived.

Should you decide to cancel their service before the contract period ends, you will be obliged to pay for three times of your monthly service fee.

Plans come bundled with landline so you don’t need to pay separately. At the same time, with its pre-existing facilities around the country, it has the biggest reach.

Most expensive on a peso-per-Mbps basis, with a rate of approximately ₱999 for a 1MB download speed. Despite being unlimited, there are more broadband plans that offer three times the speed at a cheaper rate.

SKYCABLE is spending roughly ₱3 billion to expand its broadband facilities, as demand for data in the Philippines continues to grow. As of the end of March this year, it already has 205,000 broadband subscribers. It offers the following broadband plans:

Get the right balance of broadband internet and HD cable TV

Sky Cable is one of the country’s longest running cable TV providers. Now that they’ve started expanding their scope of service to broadband connection, it only makes sense that they bundle all of their broadband plans with cable TV service. Whether you want cable TV or not, you’ll automatically get it even if you just subscribe to their broadband service.

A one-time fee will be required for the installation; the rate for that however varies per region. The initial cash-out will cover all the equipment needed for the setup of the service in your home such as the cables, modem, and the router.

Their broadband service is bundled in with cable TV, thus cutting down your monthly bills if you have a separate cable provider. Being one of the long running cable providers in the country, they already have a wide reach (though not wide enough to cover all regions in the country yet). Plus, their services are  reasonably priced, fairly reliable, and comes with good customer service.

Depending on your area, their initial cash out is quite big compared to other service providers.  Their cable TV bundle may come as a nuisance for some who don’t really need the service (and the equipment for it).

As a consumer, speed and price are the two biggest factors that we all take into consideration when it comes to choosing the best broadband plan. However, as important as it may seem, this isn’t necessarily true. Nowadays, most broadband is fast enough to meet the needs of the average user; in fact a 3Mbps connection is more than enough to help you do your research work. If there are only a few of you in a household, it wouldn’t make any sense to get a 500Mbps connection, even if you are a heavy user.

Your data needs depend on exactly how you use the internet. That’s why before you choose an broadband plan, it’s important to determine how much data you’re using every month, if you want to make the most out of your money.

Here are some basic estimates from SMART’s data calculator, to give you an idea of your data consumption.

At the end of the day, what will matter is the quality of your connection. The connection speed can be your baseline in choosing, but always do your homework and research, read reviews, talk to people you know and find out their personal experiences with a service provider in your area. You don’t need a fast internet connection that keeps on disconnecting in your area. Make reliability a priority.