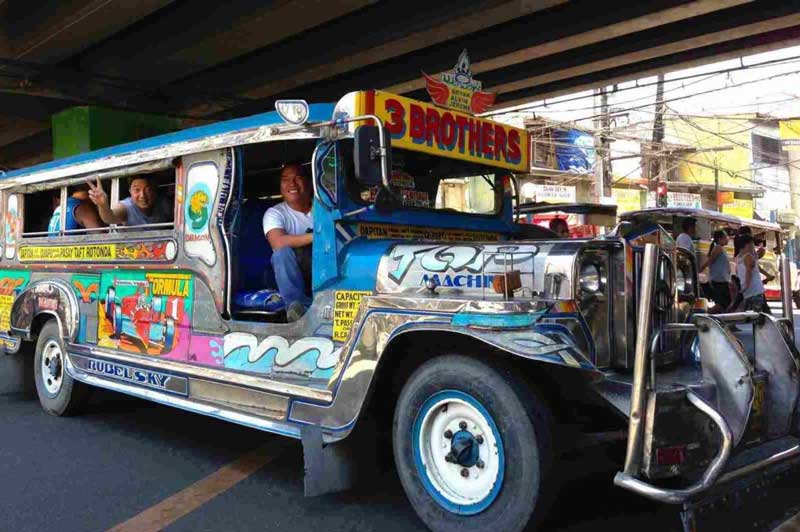 How Much Does It Cost To Get Around Metro Manila?

Travelling like a local in Metro Manila is an adventure and going around requires a great deal of planning. Aside from mapping your route, you also need to schedule your trip beforehand to ensure a relatively hassle-free trip. Meaning, you need to add at least an hour to your travel time to make it to your destination on time, especially during rush hours.

Aside from getting your own car, you can opt to take commuting options such as the light rail transit, bus, FX, taxicab, or e-hailing services. Let’s take a comparative look at these options if say, you’re attempting to travel from Ortigas to Makati.

Driving safety and convenience will always be at your side if you just drive your own car.  However, the heavy traffic in Metro Manila may not spare you from the long transit and may require you to shell out a little bit of extra cash in exchange for benefits that you get.

There is an old joke about Metro Manila driving, that once you master it, you can drive anywhere in the world. However, if you are new to the city, here are a few survival pointers:


Always remember the day when your vehicle cannot be used based on the above and city ordinances, and just commute to avoid undue hassle.

That said, the cost of driving in the Metro will vary based on the type and condition of car you’re driving, as well as the traffic situation.

The bonus though is that having your own car can get you from A to B efficiently, safely and comfortably. 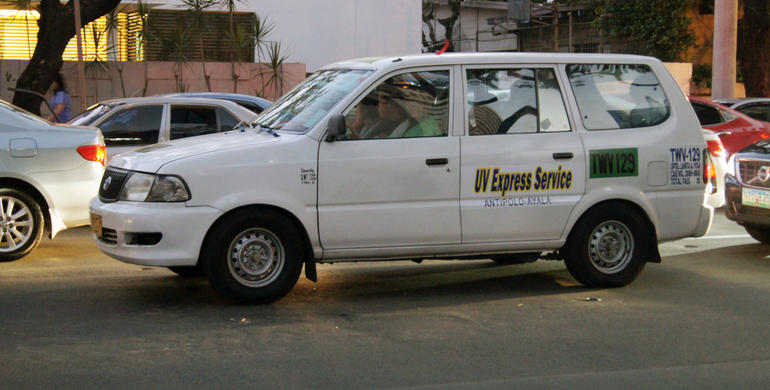 A more comfortable version of jeepneys are air-conditioned Toyota UV Express vans and Tamaraw FX vans that follow similar routes to jeepneys and picks up and sets down passengers en route. They get to choose which street to take to reach a particular destination which makes them ideal for heavy traffic situations. Fair starts at ₱20 for short hops up to ₱50 for longer rides.

Another option is the bus. For short rides, rate starts at ₱12 for air-conditioned buses while the fare is ₱10 for ordinary or non-air-conditioned buses. If you are in a hurry though, you might also want to take into account the number of stops that the bus is going to take before it reaches your destination.

Another bus option would be the P2P or Point to Point buses, which ply designated routes. Though P2Ps are more expensive than regular buses they provide comfortable rides and are faster since they do not have stops along the way. The rate from Ortigas to Makati is ₱40.

Although cash is still the most prevalent form of payment, the beep card can now be used for fare payment in HM Transport Airport Loop (Baclaran to NAIA Terminal 3) buses, BGC Bus, Citylink Coach Services, and the P2P buses of Froehlich (from Glorietta 5 to Trinoma, SM North EDSA to Glorietta 5, and SM Megamall to SM North EDSA) and RRCG (Alabang Town Center to Greenbelt 1, SouthPark Alabang to Greenbelt 5 and Star Mall Alabang to Star Mall Shaw).

Loading can be done in any of the 44 stations of the LRT and MRT and in select Bayad Center, Tambunting, Villarica and SM Bills Payment Counters. Please visit http://www.beeptopay.com/news/beep-is-now-available-at-bayad-center/index.html for the full list of Bayad Center branches offering beep™ card loading.

Loading is also available at all FamilyMart branches and Circle K branches in BGC. 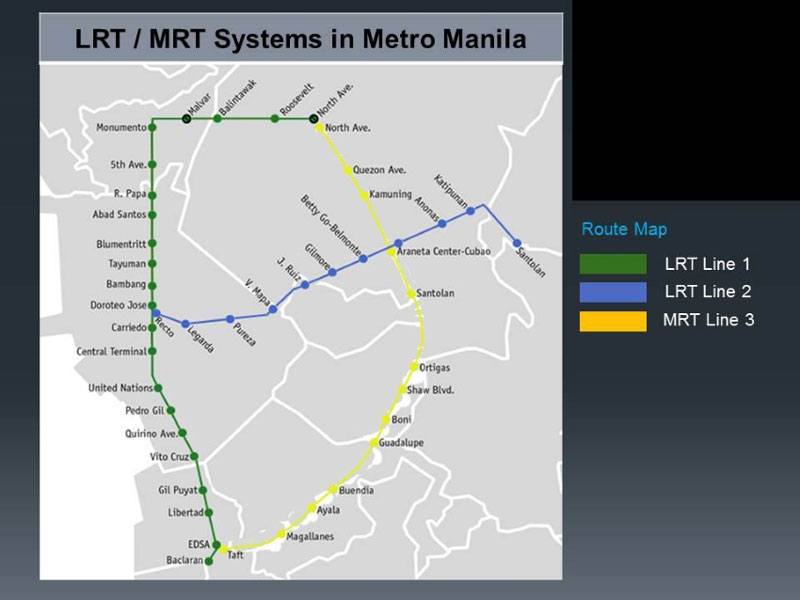 One of the cheapest and fastest means of transportation in Metro Manila are the train systems. There are two different rapid transit systems in Metro Manila: the Manila Light Rail Transit System (LRTA System), and the Manila Metro Rail Transit System (MRTC System). The Green Line (LRT-1) and the Blue Line (LRT-2) form the LRTA network, while the Yellow Line (MRT-3) forms the MRTC network. There are a total of 42 stations: with 29 stations on the LRTA and 13 stations on the MRTC.

Fares are ₱13 to ₱28, depending on distance. The trains are a good alternative if you are in a hurry and do not mind being jostled around by the crowd. It can take you to your destination relatively faster than riding other forms of public transportation. However, coverage of the city is far from comprehensive for now.

Transferring between train lines means leaving the station and lining up anew for another ticket, so it is advisable to get a Beep card (the same one used for buses as stated above) or  ‘Stored-value’ card, which cost ₱100.

If you are traveling from Ortigas to Makati, take the MRT in Ortigas to Ayala Station. The one-way fare is ₱20.

Now, if you’re planning on taking public transportation, it is best to remember the following tips: 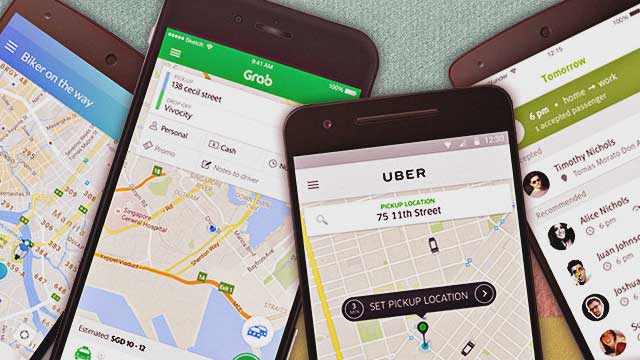 Starting in 2015, ride sharing apps such as Grab and Uber became available to the commuting public. Although a tad more expensive than your average taxi cabs, they are a far more convenient way to go around, without having to bring your own car. All you need to do is to book through the app of the service you wish to use and you can be connected to the driver near you. 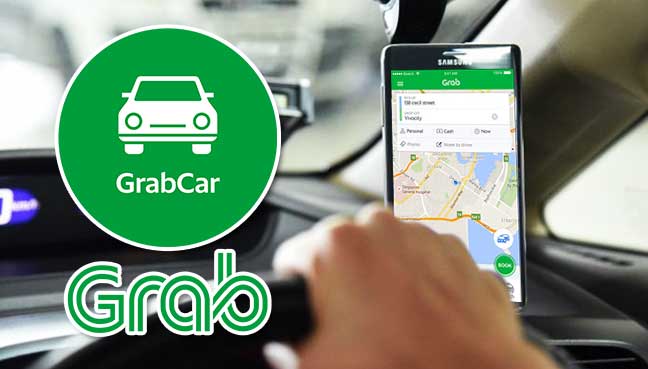 GrabTaxi may seem like the cheapest option at first glance but bear in mind the additional booking fee of ₱40.

Despite the surge prices, which is now thankfully controlled, the extra amount you pay for these services are rewarded with a lot of convenience. Take note though that rates for both apps dramatically drops when you book outside rush hours, meaning between 11am to 3pm and 11pm to 4am. So we suggest scheduling your trips during those times if possible. 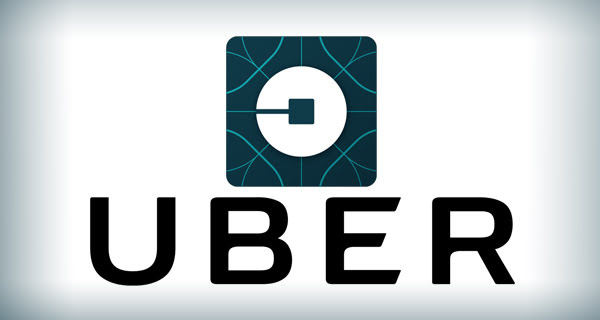 A little pricier than Grab, but almost the same if you book UberPool.  Here are your options:


Ride-sharing apps like Uber can also save you more money through promotions offered by their partner banks. RCBC Bankard for example provides free rides worth ₱200 to their cardholders, when you use it as your payment method for your Uber Ride. 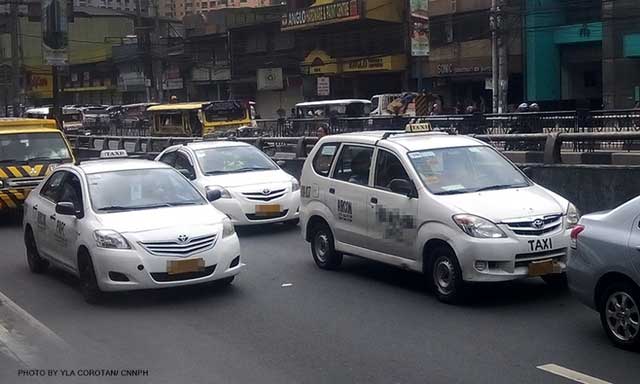 Flag down rate starts at 40 pesos and is normally 40% cheaper than Grab or Uber. What makes them notorious though are the rudeness of some drivers and the tendency of some to hustle commuters by asking for additional ₱50 to ₱100. They can be picky as well, particularly during rush hours.

Here’s a quick chart showing the different modes of transport and their costs:

As illustrated in the table above, taking the MRT seems to be the fastest and cheapest option to traverse around the Metro. However, rides can be crowded and you would have to brave long lines during rush hours. On the other hand, if you can schedule your appointments to coincide with the P2P buses, then you can have a relatively more comfortable ride than regular buses.

Meanwhile, both Grab and Uber can be hard to book during rush hours and can be expensive but they are far more comfortable than taking the cab or driving your own car, particularly when traffic along your travel route is at its peak.

All in all, you have a myriad of options but there are certain caveats for each, and it is up to you to decide if you’re feeling particularly adventurous or you just want a hassle-free journey.